Exporting a feature is the processing of exporting a configuration option (or a series of options) from the database and saving them as a features module. Let’s say you are using Bartik (or another theme that utilizes the color module to allow you to customize a site’s colorscheme.) and you change the background color of the site. When you make this change via the web interface, the configuration change is saved in the database. To export this change as a feature, you click on admin/structure/features/create. Create a name and description for your new feature, such as “Major Ursa Bartik Colors” and “Color scheme for Bartik theme used on Major Ursa”. Next under Edit Components, select Strongarm: variable. Then select “color_bartik_palette” and perhaps “color_bartik_stylesheets”. Then click on the Download Feature button. This will download a new module to your desktop with the configuration options saved as a features module. This is only step one. Next you will need to upload this new module back up to your website and enable. Once the module is enabled, the configuration is being run from code from the module, not from a configuration option in the database. This is known, confusingly enough, as reverting a feature.

add to .screenrc to get Color Schemes working

Working on an Issue From the Drupal Issue Queue

These are the steps, using git mostly, needed to work on an issue from the drupal issue queue.

cd into your development folder and git clone drupal core, (in this case, I’m working on a drupal 8 issue).

After you’ve already cloned a copy of drupal for testing and development, all you have to do is run “git refresh” to update your copy. This will download the most recent commits to drupal-core from the central git repository and apply them to your 8.x branch.

Create a topic branch for your issue

Its a good idea to do development work in a separate development branch. The following creates a new branch and checks the new branch out, so any subsequent changes will be made to that branch. To list all of the branches, run: git will show all of your branches, and it will star the current branch Next work in your topic branch, make some changes.

With git, you can work without fear! if you foul things up, getting back to a previous state is easy with git reset. The following command will return the state of your code to that of the last commit. Also, if the last good state was a few commits ago, you can reset the current state to a previous commit with where 00581a73afab6 is the SHA1 of the commit you want you working directory reset to. to find previous commits and their SHA1’s, run git log: This will give a listing of the entire commit history. You can travel back in time! To see what files have changed since the last commit, run: This will show which files have been modified. To see what the actual changes are, run:

Once you have some changes that you’d like to preserve, you first stage them to the index: Now when you run git status, you will see that the file is now under the header “Changes to be commited.” This intermediary step may seem strange if you are new to git, but it is very handy. It allows you to break up changes into separate logical commits. You can stage and commit one logical set of changes, and then stage and commit another set of changes. Although, it may be better to separate different issues into different topic branches.

Now that your changes are staged, it is time to commit them: This will open your default editor, so you can write a descriptive commit message.

Now that your changes have been made and committed, its time to create a patch that you attach to the drupal issue queue. First switch back to the 8.x branch: Next, create a patch with git diff. Drupal has a specific naming convention for patches ([module_name]-[short-description]-[issue-number]-[comment-number].patch). In the case of a patch for drupal core, this can be shortened to [short-description]-[issue-number]-[comment-number].patch The following git diff command will print out all of the difference between the current branch (8.x) and the listed branch (fix-typo):

Use git format-patch to include committer information

Alternatively, you can use the git format-patch command to include the committer information in the patch: Next go to drupal queue, write up a description, attach the patch, and change the status to “needs review”.
Open Source Projects

I am a big fan, user, and tinkerer of Scuttle: the Open Source Social Bookmarking System. In case you have never heard of it, Scuttle is similar to other social bookmarking web applications like Delicious and Pinboard. It allows you to save website bookmarks on a public site, so that other people can follow your bookmarks and you can follow other people with similar interests. Although unlike delicious and pinboard, most scuttle instances are decentralized with only a few users. So there is less of the social aspect. (That is until someone figures out how to federate all of the decentrailized installations.) You can see some of my work on different Scuttle projects on my github profile. And here’s my bookmark site which shows scuttle in use.

I have a fork of the original scuttle web app. I have add a couple of features recently. I was getting frustrated because I would bookmark a website, and scuttle would tell me that that page was already bookmarked a year ago and so would keep the bookmark in the stream a year ago, even if I updated the bookmark. The problem with that approach is that when something is bookmarked a while ago and I’m researching the topic again, I want the updated bookmark to show up with the most recent bookmarks. So I altered the code to do this. When I resave a bookmark or update it, Scuttle now saves my updated bookmark in the stream with recent bookmarks. It shows both the original date and the modified date.

There is also a firefox plugin for scuttle to update your scuttle site. I added a keyboard shortcut to the plugin on my fork of it at github, My addition adds a keyboard shortcut at “Shift-Ctrl-B”, so if you’re reading a good article, you can just type “Shift-Ctrl-B” and the “scuttle save bookmark” window will pop up. If you are interested, you can download the firefox plugin here.
Data Analysis

Tools for Working With Data

Web scraping is a technique of extracting information from websites.

Scraperwiki has tutorials on scraping webpages for data, written for Python and Ruby.

Scraper: a Plug-in for Chrome

Use to clean up messy and inconsistent data

use to see the DOM underlying web pages

If there is a table of data on a web page that you want to scrape, select it with your mouse, right click on the selection and choose inspect element in the pop up menu. This should work in Safari, Chrome or Firefox with the Firebug plug-in.

Reading Data into R from Files

Reading a Line of Space Separated Data into a vector

Trimmed Mean to the Rescue

Drawing a Scatterplot with a Linear Regression line

Map takes a vector of values and a unary function, runs the function on each value and returns the vector of return values.

here’s how to combine them

This function returns the cumulative distribution function of P(x<4) of X~poisson(5).

SSTr - Sum of Square between Treatments

SSE - Sum of Squares within Treatments

to export a graph created by R, use the following line to start the R code:

to end the R code use the following line

if you start R-mode in the same directory each time and save the session at the end of your session, then your history and session variables will be preserved between sessions.

This will show the commit as a diff.

Also you can use the commit’s sha1 as an argument

This command adds the following to your .gitconfig file:

Try to find where in the version history a bug first appeared.

If you’d like to see the number of changes in each file, add the —stat option. 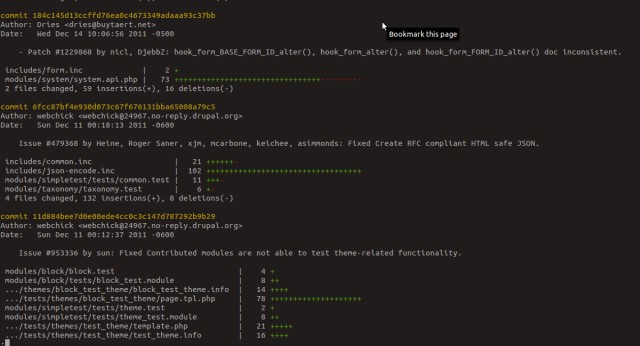 Git log also provides an intuitive way to provide a date range, with —since and —until options.

With the -p option, git log will show patches of each of the commits. 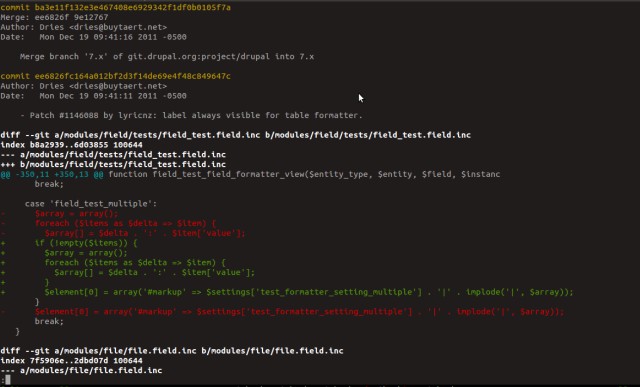 Git log with the —graph option prints a graph along the left edge to show branches of the repository. 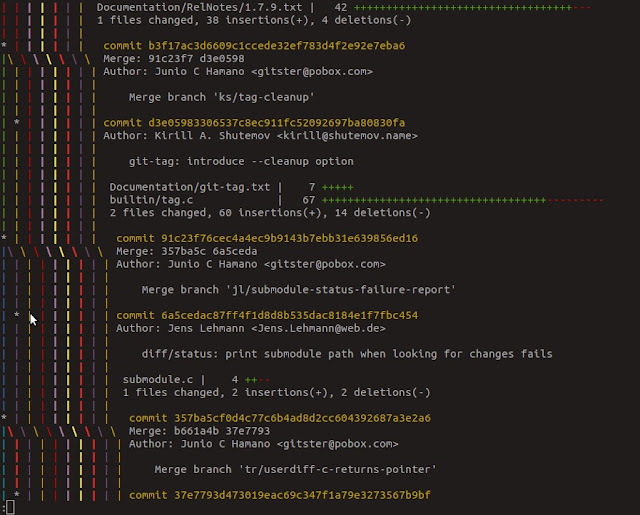 The full command for the graph screenshot above is:

The repository used in the graph example is the git repository itself. You can clone it here:

The repository used for the first two examples are from Drupal. You can also clone drupal:

Getting Started With Git

Start Using Git on a Project

Later, check which files have changed and are out of sync

Getting Started With Git

Everyday Git with 20 commands or so

The Thing About Git

Getting the Hang of Github